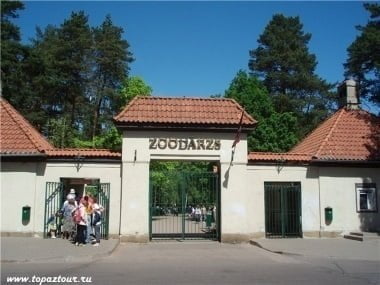 The zoo in Riga is located on the territory of the picturesque Mezhaparks microdistrict, west of Lake Kishezers. The foundation of the Riga Zoo was laid by the Riga Zoological Garden Society, founded around 1908. Already on October 14, 1912, the zoo opened to visitors and presented 267 animals of 88 species. Of the structures of those times, a mountain cafe on the shore of the lake, an entrance gate and an administration building have been preserved to this day. In 1914, the Zoological Garden acquired 538 animals.

During the First World War, many animals were taken to Germany and Koenigsberg, and the zoo closed. It opened on September 24, 1933 thanks to the new society “Latvian Zoological Garden”. The collection of the inhabitants of the zoo was then small – 124 animals of 48 species. The Second World War, which soon began, did not contribute to the development of the zoo. Only thanks to the dedicated work of the employees, the collection of animals and premises was saved almost without loss.

After the Second World War, the Riga Zoo was developing steadily and soon became one of the best in the entire Soviet Union. In 1987, there were 2150 animals of 405 species.

The zoo experienced bad times during the collapse of the Soviet Union: the number of visitors decreased, the crisis began. However, today the zoo is expanding again, active construction is underway, the collection of animals is increasing – the zoo is preparing to celebrate its centenary.

Riga Zoo is a favorite vacation spot of local residents and one of the most visited tourist attractions of Riga. To date, the exposition of the zoo, located on 20 hectares, is represented by more than 430 species of various animals, birds, and other animals. Now visitors to the zoo are offered excursions lasting from 1 hour 30 minutes to three hours.

Riga Zoo is constantly evolving, new buildings and expositions appear, animal collections are being updated. In addition, the Riga Zoo has a Ciruli branch, which is located on the Riga-Liepaja highway. In the zoo Ziruli 38 species of wild animals and 12 species of domestic animals live.

Cathedral of the Nativity