St. Jacob’s Cathedral in Riga is the main Catholic church in Latvia, the fourth largest church in Riga. The cathedral. St. James is a brick gothic monument. The first mention of the church, located on the site of the present cathedral, dates from 1225. This date, engraved on the central western facade of the church, is considered the presumptive year of the construction of the Church of St. James.

During the reformation in 1552, parishioners risked holding the first Lutheran service in Riga’s history in this church. In 1524, during the peak of anti-Catholic unrest, St. Jacob’s Church, like most of the Catholic churches of the city, was defeated, which resulted in the almost complete destruction of the interior.

During the siege of the city by Russian troops of Tsar Alexei Mikhailovich several shells fall into the church of St. James. Two of them in memory of the siege of Riga were walled up in the walls of the central facade, and two more – in the altar.

Throughout its history, the church changed its religion several times and was partially rebuilt. In 1756, an octagonal-shaped pointed spire was added to the main church building. In 1782, a new central portal was built. Since 1923, the Church of St. James once again belongs to the Catholic religion.

In 1680, an altar was created in the church, which at that time was the main royal Lutheran church. It is assumed that it is the earliest baroque altar in Latvia. Who is the creator of this altar is unknown. In 1902, a decision was made to eliminate the altar, which had already fallen into disrepair. 2 craftsmen were invited to build the new one: woodcarver Jacob Schrade and sculptor Christoph Mittelhausen. Despite the fact that the old altar was dismantled, something remained of it, namely the carved figure of the angels adorning it, which are stored in the Museum of the History of Riga and Navigation. In 1924, a new altar appeared, which was already the third in a row.

One of the interesting elements of the interior of the church of St. James is the department. It is made in the Empire style, it was made by the master August Gothilf Heybel in 1810. The department was made of red wood, intarsions with rich floral ornaments and exquisite arabesques were placed on its area. In general, the peculiarity of the temple is a mixture of architectural styles in the interior of the church, while on the outside it is relatively homogeneous.

In 1761, organ master Heinrich Andrei Konzius set about creating an organ for the church. To this day, this body has not been preserved. The new one was made in 1913, the master E. Martin became the creator of the modern organ. The windows of the Cathedral of St. James are covered with stained-glass windows, the creation of which dates back to the last century. So, three bright stained glass windows that adorn the windows of the eastern wall of the choir were made in 1902 in the Art Nouveau style. 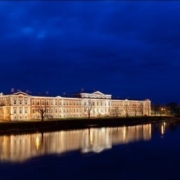