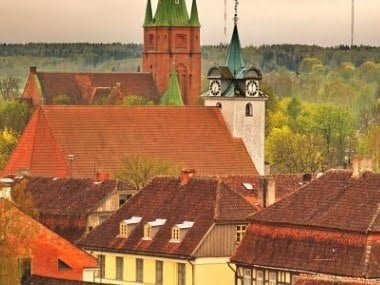 The city of Kuldiga is one of the most beautiful cities in Latvia. Tile roofs, a medieval street layout and the Alekshupite river winding among ancient houses … Miracles are everywhere at every step – flying fish, the widest waterfall in Europe, built on ancient Roman models with a brick bridge, a unique collection of playing cards. And in Kuldigsky district there is no less interesting – a real oil well, the cleanest lake in the country Zvirgzdu, plantations of shitake mushrooms and medicinal herbs, a mystical cave labyrinth, old palaces and estates, traditions of the Suit people, unique wooden toys … 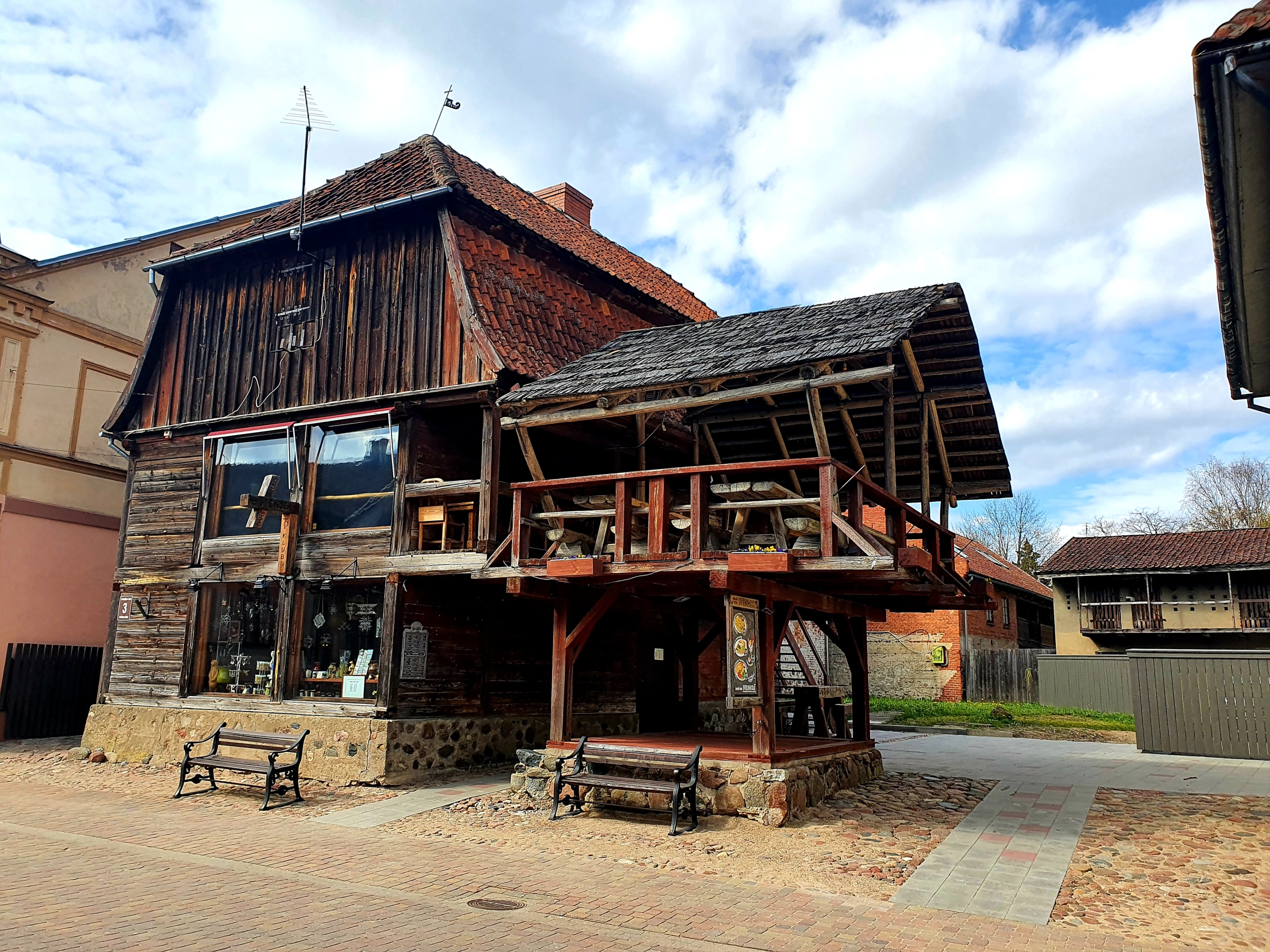 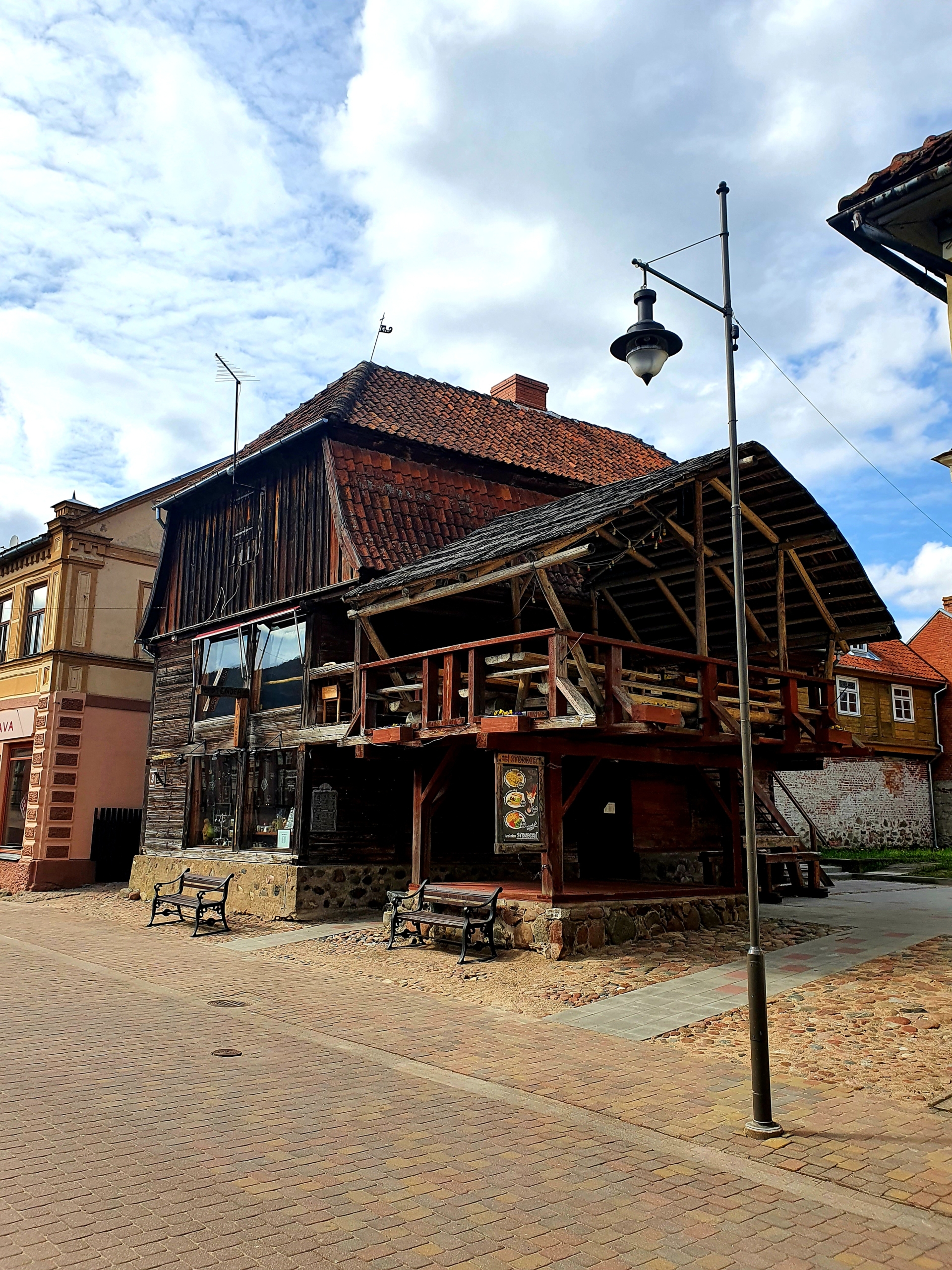 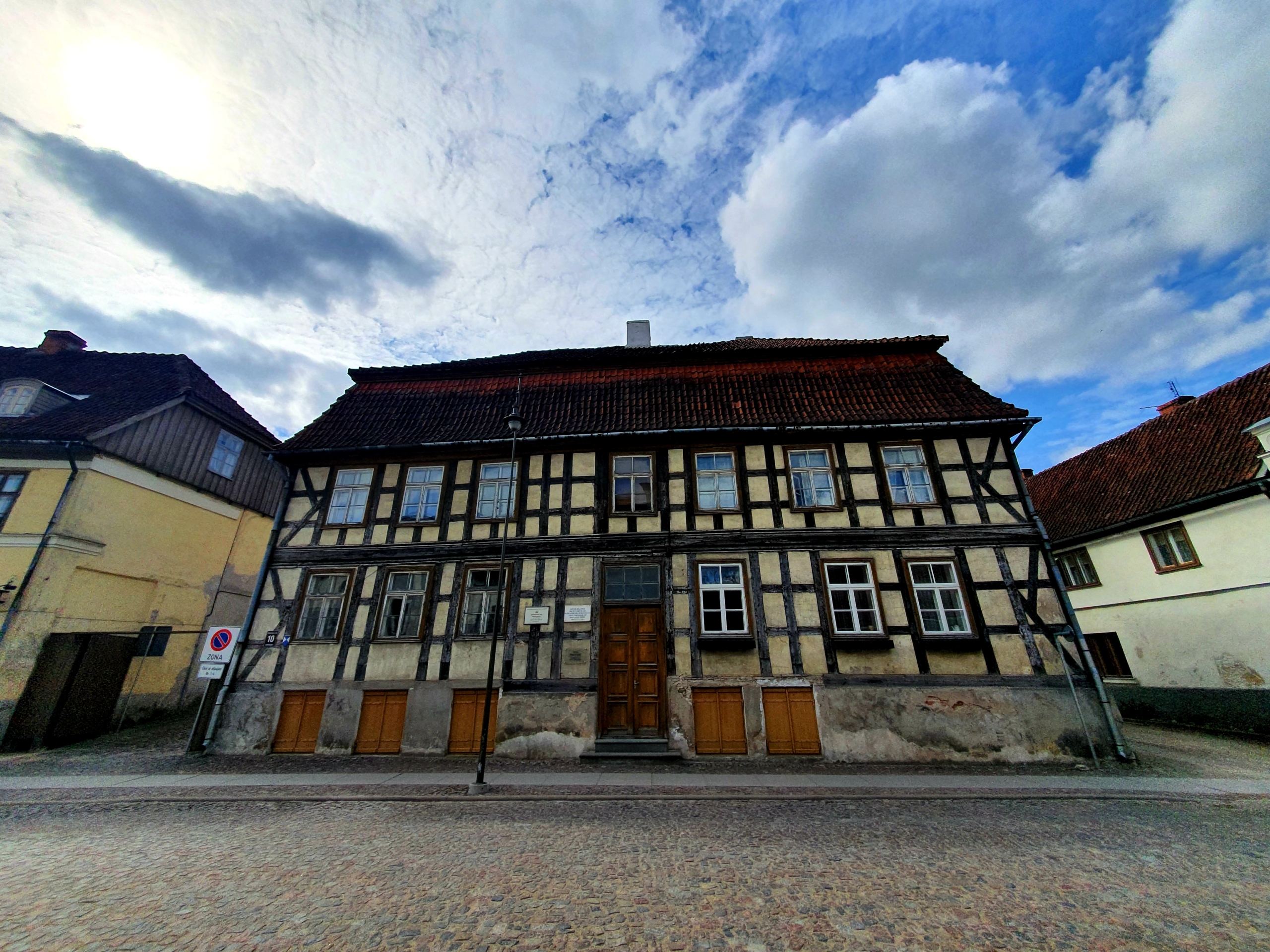 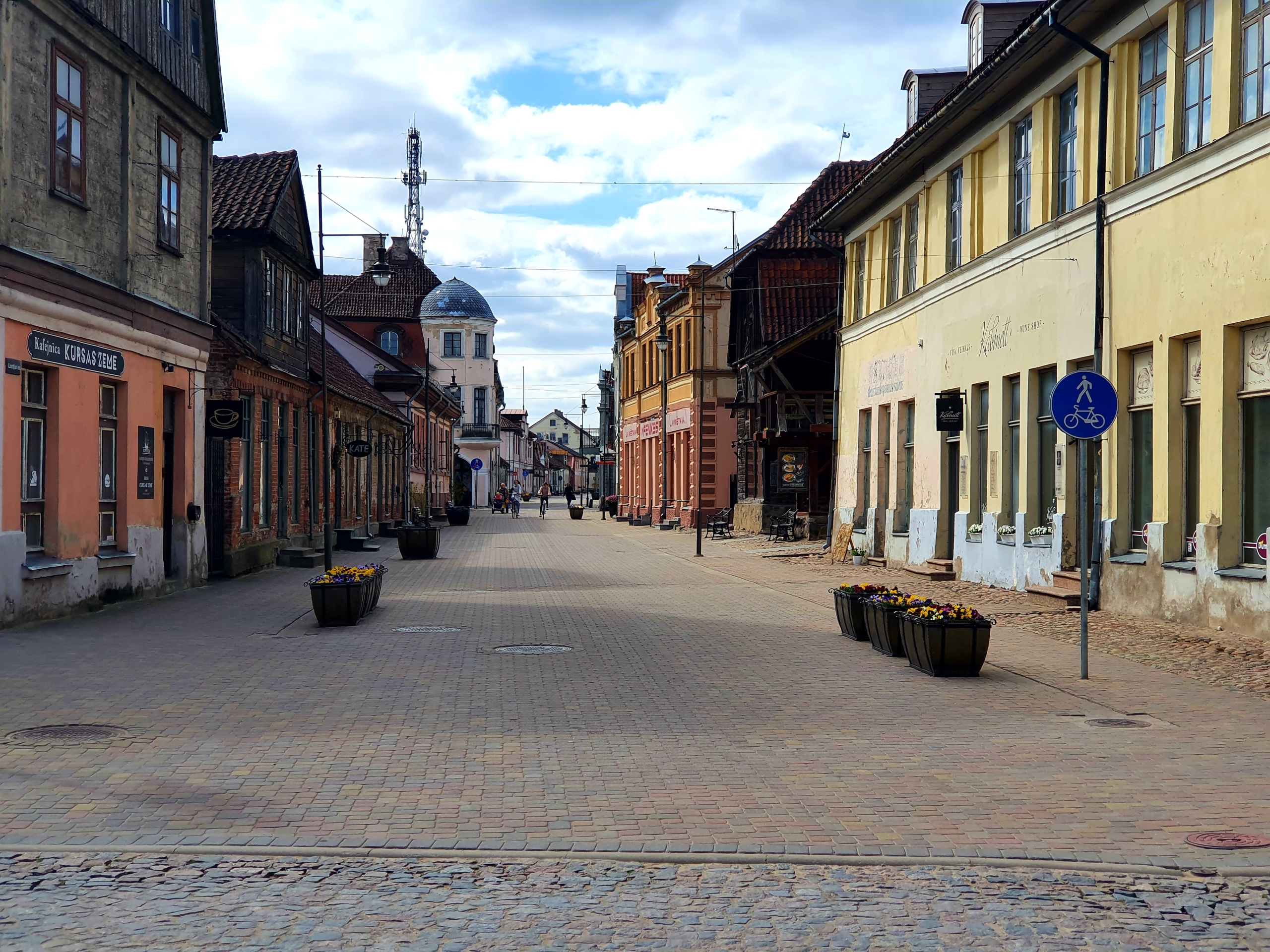 Ventas rumba waterfall in the city of Kuldiga 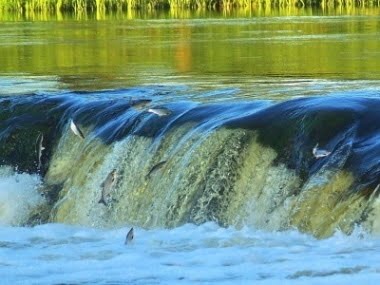 Ventas Rumba is Europe’s widest waterfall. The fact is well known. The threshold stretched almost the entire width of the river. 149 meters – it looks serious. To come to see a natural attraction, of course, is worth it. But keep in mind: on gloomy and cloudy December days, here is still not the same as in spring and summer.

Meanwhile, even in ancient times, the city of Kuldig was called the place where the fish … flies through the air. When the fish went here to spawn, they had to overcome the threshold by jumping out of the water. At the time of Duke Jekab, special tackle was invented here – in wicker baskets in the right places came both salmon and fish. We continued to fish in baskets in Kuldiga until World War II – local fishermen rented several meters of the waterfall. But you can watch flying fish in our days. If you want to witness a miracle – come to Kuldiga in late April – early May! By the way, the city opens the tourist season with a big holiday, which is called “Fish – flies!” 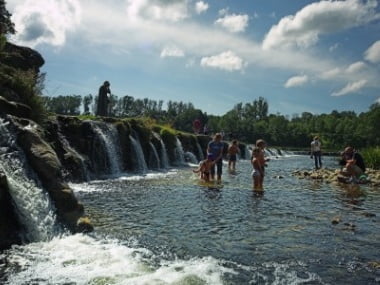 But in summer, the most amazing local attraction is swimming under a waterfall. In tsarist times, by the way, they took money from bathers for this pleasure. Now – completely free. You only need to know the places – on the right bank of the Venta, in the rocky bottom, whole baths are hollowed out by a waterfall! Artificial cascades in pools and spas after Ventas Rumba just relax.

Consider Ventas Rumba in all its glory – at any time of the year! – it is possible from the window of the Kuldig Museum located nearby, on the shore. This elegant house, the townspeople have long been called Villa Bangert.

Tradition says that this was the name of the Liepāja captain, who bought a house that attracted him as a gift to his bride. Indeed, once the villa was the Russian pavilion at the World Exhibition in Paris. Captain Bangert dismantled it, moved it to distant lands and set it on the steep bank of Venta. The view from the windows to the waterfall and the old brick bridge became the best decoration of the villa. Having told me this story, the director of the museum, Dace Bumbier, also showed a model of the Kuldig castle, which once stood on the site of the current museum. (A good half of the old city center was once built from its stones.) The museum also has the armor of a medieval knight. In especially solemn occasions, the “knight” goes on tour in Latvia, visits friendly museums. After all, this rare exhibit for those who understand the Middle Ages is also a small miracle.

But tourists are most interested in the famous collection of playing cards, the only one in the Baltic States, in the museum. In kings, sixes and aces – characters from the Duke of Jekab to President Putin.

The old bridge over Venta is the longest of the ongoing brick bridges in Europe. It was built on the model of an old bridge over the Moselle, erected by the ancient Romans! ..

It is very likely that in a couple of years the whole of Old Kuldiga, along with the Venta Valley and Ventas Rumba Waterfall, will be included in the lists of UNESCO specially protected monuments – now the city is already on the so-called waiting list.

And Kuldiga at all times was a favorite kind of filmmakers. She starred in 25 films – for example, in the “Coast” of Alexander Alov and Vladimir Naumov. In the near future it is supposed to show all the “Kuldig” paintings, having organized a small film festival.

Duke Jekab – the most legendary and amazing character in all of Latvian history – originally from Kuldigi. In the church of St. Catherine, which still stands, he was once baptized. During the reign of Duke Jekab, the unprecedented heyday of his hometown also falls. Ships were built in Kuldig, manufactories operated, trade flourished. They say that the duke always had a special tender attitude towards Kuldiga also because his beloved woman, a certain Lizi, lived here.

In the city of Kuldiga in 1838, Karl Davydov was also born into the family of a doctor – an outstanding cellist, teacher and composer, who worked for many years as the director of the St. Petersburg Conservatory. Pyotr Tchaikovsky, for example, called Davydov “the king of cellists of our century.” In memory of the outstanding fellow countryman, international competitions of young cellists are held in Kuldig, in which musicians from Latvia, Russia, the USA, and Israel participate. Next March, the competition will be dedicated to the 170th anniversary of the musician.

Legend of  the city of Kuldiga

Connoisseurs of Kuldigi will tell you many interesting historical tales. But is it possible to take seriously such, for example, a story …

Once upon a time, the Swedish king Charles XII visited the mayor of Stafenhagen. Winter, blizzard, boredom … The king wanted to have some fun with a chess game, but the game didn’t go either, he was sneaky – the courtiers to the king shamelessly succumbed. Then he ordered the enemy to be searched among the locals – is there really no one in this city who can play chess? .. And he found a commoner, defeated the king! Yes, he beat so beautifully that the king immediately granted the winner a chest full of luxurious royal outfits. Yes, just from them for joy, because by law then a low-ranking man could not wear a royal dress. Then the burgomaster Stafenhagen himself poured a bit of warning. And he bought the royal chest with all its contents from the townsman. What happened to the lucky chess player, history is silent. But the enterprising burgomaster flaunted in royal attire, and built the chest for eternal times into the wall under the stairs of his Kuldig house.

The miracle, in fact, is that after this tale you will be led to this very chest to show. Through the courtyards and backyards along the Alekshupite River. On the facade of the desired house is a tablet “Monument of architecture. Stafenhagen’s house, ”and the royal chest is under the stairs.